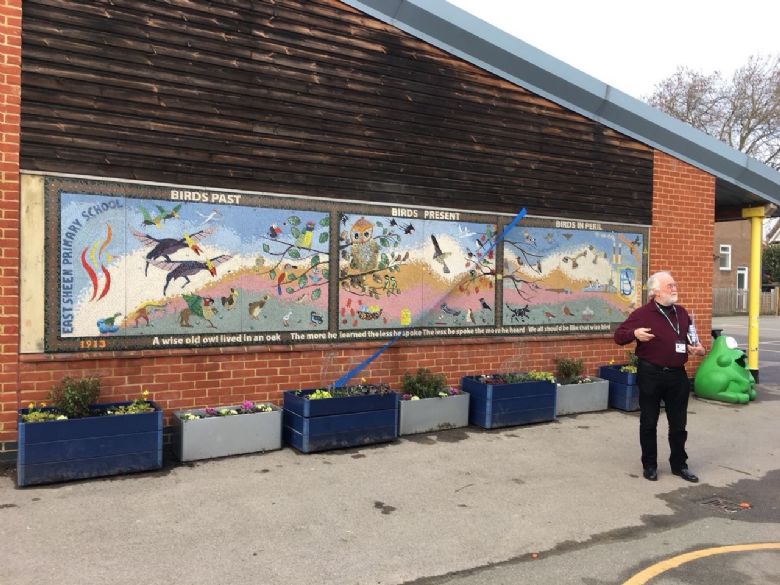 East Sheen Primary School officially unveiled a magnificent piece of artwork that took more than a thousand pupils an amazing seven years to complete. Measuring 7.2m by 1.4m, the mosaic mural of birds decorates the side of the Reception building. The whole school excitedly watched artist John O Brien cut the ribbon along with local MP Zac Goldsmith and other invited guests.

“I’m really very proud of what the children have achieved,” says John, who first began the artwork in September 2010. “We originally wanted it to be finished for the school’s centenary in 2013 but so many children wanted to join in it took longer to complete,” he explains.

John took up mosaic art in 2004 after he retired, and has since worked with five other local schools. He became involved with East Sheen Primary after having lunch with his old friend and former colleague Raz Khan, the school’s chairman of governors. “He told me there was a wall crying out for decoration – after the school fire in 1972, new classrooms had been built. The headmaster at the time, David Ford gave me an image of a phoenix bird and we came up with the idea of creating a mural of birds.”

John was keen for the fundamental work to be carried out by pupils and asked all children of Year Four and older to draw a bird. He has carefully kept much of the artwork – scores and scores of pictures from a dodo to a kingfisher, kestrel, partridge, duck, robin and wren. “The criteria we used to choose which drawings would be included was that the images had to be aesthetically pleasing and at the same time, mosaic-able. This form of art means that you can’t achieve a great level of detail. We wanted to depict the birds accurately as well as tell a story.”

Three panels were planned: Birds of the Past featuring a pterodactyl; Birds of the Present such as an owl and a kestrel and Birds in Peril, who may not be here in the future, which focuses on a hen harrier. John visited the school every week and had no shortage of willing helpers. “There were a few who became addicted and kept sneaking in but most children were only able to come once or twice in order for everyone to have a go.” Lorna Major organised the logistics of the project in school, from communicating with staff to explain how the children should  create the original drawings to ensuring a fair rota of volunteers; she worked beside John throughout and has become quite the expert herself!  Other teachers with an interest in art also had the opportunity to contribute, including Mrs Mitchell and Scott Hunter of Next Steps Sport.

Designed in the classic Roman style, the mosaic is made up from thousands of glass tiles and unglazed ceramic tiles as well as 9-carat gold, Hama Beads and even a nail. “We added a few secrets in as well,” says John. “Some children wrote their names in Morse code’s dots and dashes. We have also included many of the things that put birds in peril, especially the lovely black and white cat with no bell in its collar.”

A paper drawing was placed under Perspex, which was chosen for the base of the mosaic because of its ability to withstand the elements. Each tile was painstakingly cut out by the children and placed onto the Perspex. “One of the challenges was managing the different skills of the pupils and ensuring their safety,” says John who ingeniously came up with safe ways to cut the tiles including using a fizzy drinks bottle with the top removed so children could cut the glass tiles inside it without risk of splinters. Heavy duty plastic bags were also used to nip tiles.

The final project is a spectacular culmination of everyone’s hard work. Each bird, including the glittering golden owl sitting in a tree, looks towards the central, hovering kestrel which provides a focal point for the work, with the background carefully graded using six colours. A tree-trunk border frames the mosaic, which is flanked with the school’s original logo and year of opening along with the new logo and year the artwork was completed. Look closely and you’ll notice the four seasons are depicted as well as John’s thought-provoking verse:

“A wise old owl lived in an oak,

The more he learned the less he spoke

The less is spoke the more he heard

If you’ve not examined it closely, next time you walk past the Reception block why not take another look at East Sheen Primary School’s wonderful mosaic. It is destined to be treasured and enjoyed for many years to come. 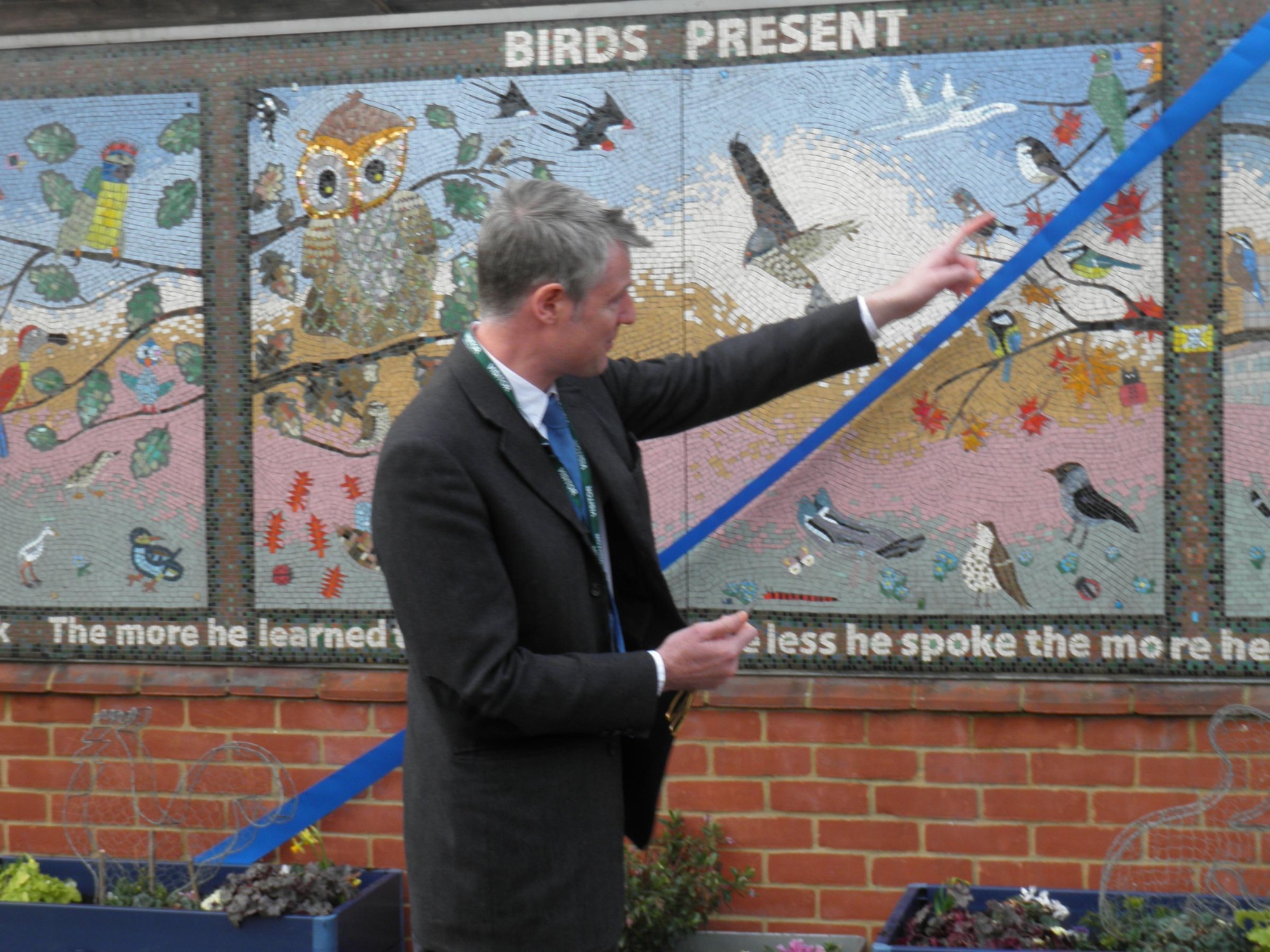